I cannot persuade myself that a beneficent and omnipotent God would have designedly created the Ichneumonidae wasp, with the express intention of their feeding within the living bodies of caterpillars, or that a cat should play with mice.

As anyone who has been reading this blog for a long time knows, I find the philosophical “problem of evil” fascinating and absorbing.  Every now and then I post some of my musings.   Here I go again.

There is a general consensus among philosophers and theologians that the so-called “free will defense” solves the problem as it relates to “moral evil,” which is defined as evil that is the product of the acts of free agents (crime and war for example).  It is possible that a perfectly good Creator would value free will so greatly that such a God would allow it, even though it enables the doing of evil.

As I mentioned in a recent post, the question of “natural evil” (defined as evil which is not the result of the exercise of free will) is much more difficult.  Such things as childhood cancer, mudslides that bury villages, plagues, famines, devastating tornadoes, hurricanes and earthquakes, etc. clearly aren’t necessitated by free will.

But that isn’t very comforting or satisfying when trying to make sense of the tragic death of a child, or seemingly gratuitous suffering in nature, for example.

And why is so much violence built into the very biological fabric of living creatures?

The wasps to which Darwin referred in the quote above (taken from a letter he wrote to the biologist Asa Gray) lay their eggs inside the bodies of caterpillars.  When the eggs hatch, the baby wasps feed on the caterpillar’s internal organs, but in a gruesome way that keeps the caterpillar alive for as long as possible.  And probably all of us have seen a cat torturing a mouse. Nature abounds with such things.

A hornet killing a spider

In fact, most animals, from single celled organisms to humans, survive, at least in part, by killing and consuming other animals.   Nature , as Tennyson put it, is red in tooth and claw.

Ancient people tried to make sense of the violence and bloodshed of the natural world. According to the Biblical creation story, originally all animals were herbivorous and there was no violence in nature.   Violence, predation and death were introduced into the world, the story goes, as a result of “the fall,” following which the earth was cursed.  But the prophets foretold of a coming age in which all violence will end, the weapons of war will be beaten into farm tools and the predation and violence of nature will be no more:

And the wolf will dwell with the lamb,
And the leopard will lie down with the young goat,
And the calf and the young lion and the fatling together;
And a little boy will lead them.
Also the cow and the bear will graze,
Their young will lie down together,
And the lion will eat straw like the ox.
The nursing child will play by the hole of the cobra,
And the weaned child will put his hand on the viper’s den.

This certainly suggests that the ancients sensed there was something wrong, or at least imperfect, about creatures killing one another to nourish themselves and stay alive.

The traditional attribution of predation to “the fall,” however, simply cannot survive our current knowledge of the evolution of life on earth.  Whatever allegorical significance that story may have, predation existed for millions of years before there were humans, so it can’t reasonably be blamed on the moral shortcomings of our species.

I don’t know why cats torture mice, or why the Ichneumonidae wasp feeds by slowly killing its host from the inside.  But I’m confident that their behavior is not a result of any moral failings on either their part or on ours.  If such things qualify as “natural evil,” then we can just add them to all the other seemingly inexplicable natural evil in the world.

As for the prophets’ vision of a future state of harmony among all creatures, it is beautiful. May it come to pass.  For now, however, lambs do not lie down with wolves and lions do not eat straw.

But whether that “peaceable kingdom” ever comes or not, in the meantime we humans need not behave like the wasp or cat.  Animals destined to nourish us need not be tortured first.

With concentrated animal feeding operations and the industrialization of animal husbandry, humanity now inflicts more needless suffering on animals than ever before. The systematic torture and abuse of farm animals in our industrial food system is not something woven into the nature of our being. It is not necessary or natural.  It is moral evil. 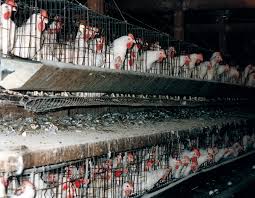 Perhaps in some future age animals will no longer suffer.  John Wesley speculated that in the age to come animals will not only be free from violence, but that they might also be “raised higher in the scale of being…making them what we are now.”

Of course that is all just interesting speculation.  But in the here and now we live in a reality where animals suffer needlessly, in order to increase the profits of the corporations that churn out meat to feed humans who no longer appreciate the significance of animal husbandry.

We thereby reduce ourselves to the level of Darwin’s wasp.

That’s on us, not nature.

The splash of yellow means spring is coming
It's a good day to hunker down in the barn
Lunch on the farm. Sweet potatoes, roasted Brussels sprouts, and venison tacos with homemade salsa. Everything on the plate except the taco shells came from this farm.
Minnie. Our bottle baby.
Market day
Good morning