It’s hard to believe that the consequences of industrial pig operations could get any more disgusting and dangerous than they already were.  But now we’re learning that in the vast lagoons of manure associated with these vile places, some mysterious explosive foam is appearing.

As I’ve written frequently on this blog, hog CAFOs (confined animal feed operations) breed disease and are inherently inhumane.  Because they concentrate so many animals into to such a small space (animals which by nature should be living outside in small groups) they also generate an enormous amount of manure.   The industrial practice is to wash it all into a “lagoon” which becomes a breeding ground for pathogens.  These manure lagoons are a principal adverse environmental consequence of these facilities. 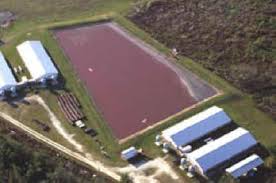 Below is a disturbing article from Mother Jones about the newly discovered exploding foam.  I learned about this on the Daily Yonder was directed to the Mother Jones piece.

Please take a minute and read this.  I also recommend that you take a look at the portion of the referenced video that shows this stuff.  That’s a little of it in the shovel in the first photo.  As the video shows, it seethes, bubbles and writhes as if it is alive.  Note also that the industrial response, predictably, has been to dump antibiotics into it.  At least 25% of CAFOs in Midwest are producing this and numerous explosions have occured.

…starting in about 2009, in the pits that capture manure under factory-scale hog farms, a gray, bubbly substance began appearing at the surface of the fecal soup. The problem is menacing: As manure breaks down, it emits toxic gases like hydrogen sulfide and flammable ones like methane, and trapping these noxious fumes under a layer of foam can lead to sudden, disastrous releases and even explosions. According to a 2012 report from the University of Minnesota, by September 2011, the foam had “caused about a half-dozen explosions in the upper Midwest…one explosion destroyed a barn on a farm in northern Iowa, killing 1,500 pigs and severely burning the worker involved.”

And the foam grows to a thickness of up to four feet—check out these images, from a University of Minnesota document published by the Iowa Pork Producers, showing a vile-looking substance seeping up from between the slats that form the floor of a hog barn. Those slats are designed to allow hog waste to drop down into the below-ground pits; it is alarming to see it bubbling back up in the form of a substance the consistency of beaten egg whites.

And here’s the catch: Scientists can’t explain the phenomenon.

Check out this amazing 2011 video presentation on the matter by University of Minnesota researcher David Schmidt. He opens by describing a 2009 explosion that lifted a hog barn a “couple of feet off the ground” and blew the farm operator himself 20 feet from the building. (Thankfully, he wasn’t injured, and there were no animals in it.) And check out the footage, starting about 3:19 in, of the foam itself, which must be seen to be believed. At one point , a shovel dips into the mire and scoops up as sample—which jiggles and pulsates, alive, apparently, with microbial activity. Schmidt also does a great job of explaining just how manure foam can cause explosions.

I wrote about the phenomenon about a year ago. But these days, there’s not much in the agriculture trade press about it. Which led me to wonder: Has the mysterious foam subsided—or congealed into yet another fact of factory farming that isn’t even notable anymore, like, you know, raising hundreds of pigs over pits that concentrate their waste, or dosing them them daily with low levels of antibiotics, leading to rampant antibiotic-resistant bacteria?

I decided to do a bit of digging for an update. Via email, Angela Kent, an associate professor in the department of natural resources and environmental sciences at the University of Illinois, informed me that “manure foaming” is “still a very serious problem among pork producers in the Midwest.” Scientists have still not been able to finger the cause of it, but “we are in the midst of a large multi-institution investigation focused on finding the cause of this very serious problem.”

So: still happening, and still no explanation.

I then got Larry Jacobson, a professor and extension engineer at the University of Minnesota who has been working on the issue, on the phone. He confirmed that the problem persists—just about a month ago, he said, workers were welding metal fixtures in an empty hog facility and a fire broke out, likely because a spark managed to penetrate foam enough to free trapped methane and ignite it. (No one was injured.)

Jacobson said that surveys show that around 25 percent of operations in the hog-intensive regions of Minnesota, Illinois, and Iowa are experiencing foam—and “the number may be higher, because some operators might not know that they have it.”

He added that the practice of feeding hogs distillers grains, the mush leftover from the corn ethanol process, might be one of the triggers. Distillers grains entered hog rations in a major way around the same time that the foam started emerging, and manure from hogs fed distillers grains contains heightened levels of undigested fiber and volatile fatty acids—both of which are emerging as preconditions of foam formation, he said. But he added that distillers grains aren’t likely the sole cause, because on some operations, the foam will emerge in some buildings but not others, even when all the hogs are getting the same feed mix.

But if the causes of manure foam remain a mystery, a solution seems to be emerging, Jacobson told me: Dump a bit of monensin, an antibiotic widely used to make cows grow faster, directly into the foam-ridden pit. At rather low levels—Jacobson told me that about 25 pounds of the stuff will treat a typical 500,000 gallon pit—the stuff effectively breaks up the foam, likely by altering the mix of microbes present. No other treatment has been shown to work consistently, he said.

Thankfully, monensin isn’t used in human medicine. Still, it’s striking to consider that the meat industry’s ravenous appetite for antibiotics has now extended to having to treat hog shit with them.